This is a story from the writing challenge a friend and I are doing as a way of practicing our writing skills.

The picture is below the story, and here is

Taeliun Highfeather slowed her wings as she gently touched down next to Chuckling Creek. The buzzing clatter faded to a bubbling quiet from the waters as she sat on a small boulder. She concentrated, and both leaves and grass, bent and flowed to her, covering her with a rich emerald dress held by two thin straps across her shoulders. She shook out her short brown hair that she’d cut just that morning, and waited for Siki’ek to arrive.

The morning sun had barely started to shed its orange coat for yellow when the Iridescent Drake made his appearance in a whirl of colors and melodic chirps. Siki’ek noodled through the air to hover in front of Taeliun. She gazed at the miniature Drake hovering scant inches from her nose as a wistful pout formed about her lips. The Drake noticed the change and hovered higher concern darkening his scales.

“Whyfor are your wings not humming the air and your nose reveling in the scents of morning little Taeliun?” The young faery blew her bangs away from her forehead then brushed them to the side with her left hand.

“I’ve been told by Mother to wait here. So I’m waiting.”

“I asked Mother the same question, and she said, ‘you will know when it happens.” She rested her elbow on a knee, and supported her chin as she sat. The other hand draped across her legs. “I do so wish I knew what I was waiting for.”

The diminutive Drake whirled in the air, his colors brightening as he gamboled above the ground. “Perhaps it is an adventure! All adventures wait to happen!”

Taeliun perked up, her eyes getting a sparkle of mischief. “I do so hope it is! I shall wait for it!”

For the next while she and her companion waited eagerly, and quietly. It wouldn’t do to startle the adventure into running off before it started. Birds flitted from tree to tree in colors of brown and green, and red and yellow, and orange and black. Each melodius whistle and chirp felt like a premonition of excitement to Taeliun as she cast her eyes everywhere looking for the adventure. Finally she slumped back down on the tree root once more and sighed.

“I suspect it is not an adventure. Adventures must be what one goes looking for, not waiting for.”

The Drake whirled again, flitting a quick circle about her head, and stopping to hove mischieviously in front of her once again. “Maybe adventure is something that needs to be looked for. I shall think more about it.” Siki’ek settled with a quick whoosh of wings next to Taeliun. “Perhaps it must be something else we are waiting for.”

“You do not have to wait with me, Siki’ek, Mother did not ask you to wait.”

The little Drake scoffed and huffed and fluttered his wings. “Whyfor should I not wait? You are waiting, I can wait also.” He gave a dragonly smile of iridescent good cheer. “If I do not wait, I will miss what you are waiting for. It is much more fun to wait with another than adventure alone.”

Taeliun smiled and Siki’ek bounded off the ground, bright colors dancing as he noodled about once more in the air in front of her. “I wonder what it is we are waiting for, Taeliun. Whatever it is, it is certainly taking its own time getting here.”

He settled on the ground and resumed his waiting along with Taeliun’s. Over the next while of aniticipation the observed deer of brown and white pick carefully through the trees; small brown rabbits scampered about, nibbling plants. They froze mometarily when the birds squawked loudly. The sped off in a blur of brown just before a fox in soft orange appeared just where the rabbits had been.

It sniffed the ground, casting back and forth slowly, then began trotting the direction the rabbits had sped off. Taeliun wished them well. A hungry fox was a fast fox, and rabbits were smart to be elsewhere when one searched for food. Siki’ek lept into the air, startling the fox, which vanished into the low growth in an instant. The two friends gazed at each other, smiling and Siki’ek once more dropped from the sky to sit next to Taeliun.

A leaf chose that moment to drop from the lofty branch it clung to. It’s fluttering descent captivated both companions as the light breeze flipped it, spun it in a circle then lifted it higher in the air before finally allowing it to tumble to the ground. The breeze played with it, and rolled the leaf onto its edge and then over onto its back, finally laying flat against the ground. The breeze tried to lift it once more but now the leaf clung stubbornly to the ground and refused to move.

The little Drake pounced on the leaf, grasping it by its stem and leapt into the air, flying near the tops of the trees and releasing the leaf to begin fluttering back down once more towards the waiting earth. “It’s fun to chase, but slower than dragonflies. Flying bugs are easier to catch than it. They don’t bounce around as much.” Siki’ek swooped at the leaf which the breeze flipped into a roll, causing the Drake to undershoot. He rowed at the air, wings buzzing determinedly for altitude, then he flattened out and dove, snapping up a butterfly before returning to attack the leaf.

“I wonder when waiting is going to be over. Today has been fun, but I do not want to stay here after dark.” She remained properly proper sitting on the root as the leaf fluttered once more to earth. Siki’ek remained in the air chasing moths and butterflies for a snack. Seeing the little Drake eat reminded Taeliun that she had not eaten anything since setting out to do as Mother asked.

“Perhaps,” said the tiny Drake thoughtfully, “Perhaps what was to happen, did happen?”

The Drake settled on Taeliun’s knee for a moment, then flitted up to eye level.

“Perhaps it was to find what we could wait for?”

Taeliun frowned and gazed at the iridescent creature. “What do you mean?”

“Did your Mother tell you what to wait for?”

“No, she did not. She only said I’d know when it happened.”

“Maybe that was what happened.”

“I am very confused, Siki’ek. Why are you saying something happened? All we saw were bugs, and sky, and clouds, and rabbits, and birds, and foxes, and deer” she said in frustration.

“Because that was what happened.”

She glared at Siki’ek, and as she opened her mouth, it closed again just as quickly.

“We were supposed to see all that?”

“But, if what was supposed to happen, did happen. Why was it not an adventure?” She pondered for a moment, then found herself getting caught up in the idea. “We saw the day happen, and it happened around us! No one else could see what we did!”

“Let’s go tell your Mother!” The Drake noodled in the air then darted straight for Taeliun’s home, darting and dodging between branches and leaves. Taeliun laughed and spread her wings. She buzzed after her friend and back toward home. 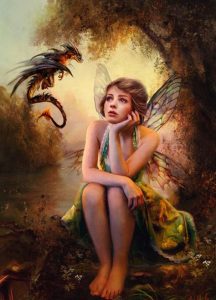